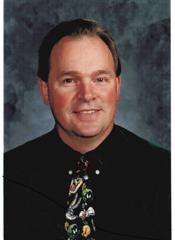 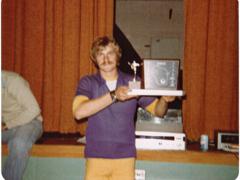 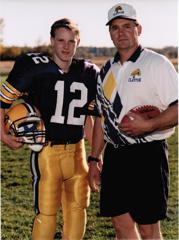 Ed Langham was born to Roger and Marie Langham on August 4, 1953. Ed was the 6th of 7 children and grew up on a dairy farm about 14 miles from Birchwood, Wisconsin.  Ed attended school at Birchwood and was able to participate in football, basketball and baseball through a dedicated effort by his parents. He was a captain on Birchwood's first ever conference football championship team. He was an All-Conference player in both football and basketball and was named as a Northwest First Team Football Player as selected by the Eau Claire Leader Telegram Newspaper.

Ed was recruited as a walk on at UW-Madison in 1971 where he played on the freshman team. Freshmen were not eligible for varsity at that time.  Ed transferred to UW-Superior and never missed a down playing safety.  Ed earned All-Conference and All-District honors his senior year.  He was awarded The Most Scholarly Athlete by highest GPA and was recognized as the Team MVP.

Clayton won 6 football conference titles during those 27 years and finished second 10 times. In the modern playoff format, Clayton would have been in the playoffs 18 times.  Clayton did participate in the playoffs 5 times during Coach Langham's time as coach, including a 4 over-time period loss to the eventual state champion. Ed was a representative for the WHSFCA and served on a committee that developed the present high school football playoff format.

Clayton High School’s enrollment ranged between 80 to 100 students. Having over 30 and sometimes over 40 players on those teams showed a high level of enthusiasm for football. The love of the game that Ed helped to establish in this small community is being paid forward through several former players who have become high school football coaches.