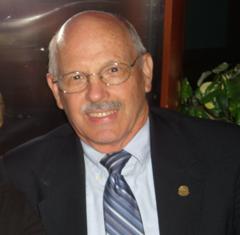 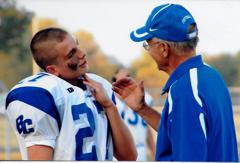 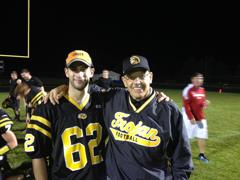 Jay was born in Appleton, WI, in 1943, but grew up in Milwaukee, attending Juneau High School and UW-Milwaukee where he played one year of football. He taught at Brookfield Central High School where he coached football at all levels for 44 years. While at Central, the teams won 10 conference championships and took 3 second-place state finishes on the turf at Madison. Future NFL players Steve Avery, Joe Thomas, and Brad Nortman were part of the Brookfield Central program during Zimmerman’s tenure. Jay was Head Football Coach at Central in 1979-81 with a record of 10-17. His overall record in coaching Central at the JV and freshman level was 193-138. Jay also served as an assistant and head track coach at Central for 24 years (10 conference championships), and was freshman golf coach for four years.

Jay now is an assistant coach at East Troy High School, and last fall completed his 50th year of coaching high school football. In his six seasons at East Troy, the Trojans won one conference championship and have made four playoff appearances.

Jay met his wife Anna while teaching a summer physics class at UW-River Falls. They were married in 1995 and taught together at Brookfield Central for ten years. They live in Mukwonago and enjoy traveling, hiking (often with their eleven grandchildren), and attending UW football games. They are active in Brooklife Church in Mukwonago.