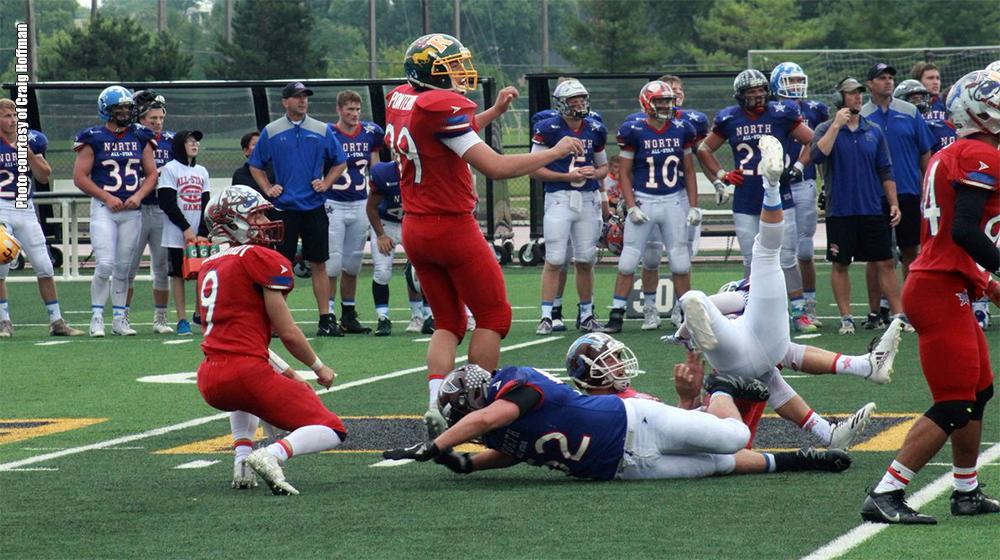 The 2018 WFCA All-Star Games were held Saturday at Titan Stadium in Oshkosh. The South squads took the final two games of the afternoon after the North 8-Man team posted victory in the morning. Full stats and recaps below.

The WFCA All-Star Games serve as a fundraiser for the Children's Hospital of Wisconsin. This year's coaches and players raised more than $487,000.

For a fourth straight year, the North 8-Man All-Star team claimed victory at the WFCA All-Star Games in Oshkosh, defeating the South team 36-18.

The South scored first on a 20-yard field goal from Brady Laabs of Oakfield. Later in the first quarter, the North went ahead 6-3 when Brandon Daleiden (Northwood) found Elijah Volz (Northwood) for an 11-yard score. The teams combined for four scores in the second quarter, with the North taking a 24-11 halftime advantage after getting a touchdown on the final play of the half.

The North would score twice more, including a 22-yard interception return for a touchdown by Newman Catholic's Jeremy Damask, before the South punched in the final touchdown of the game to make it 36-18.

Oakfield's Eric Jacob provided much of the offense for the South team, throwing for 224 yards and a pair of scores. The South was held to minus-one yard rushing.

The North team seemed in control a couple different times, but a late rally capped by a game-winning 40-yard field goal from Melrose-Mindoro's Victor Ponterio (see video below) with just 17 seconds remaining gave the South a 22-21 victory.

The North team went ahead 15-0 midway through the second quarter after Kobe Berghammer (Cumberland) found Nathan Stoffel (Marathon) for a touchdown and Zayne Rodencal went in for a 20-yard score.

The South team got two touchdowns of it's own to close out the half though, as Lake Mills' Ben Dunkleberger threw scoring passes to Fennimore's Trevor Neuroth and Lake Mills' Hayden Iverson, but the North still led 15-12 at halftime.

Amherst's Marcus Glodowski ran for a 37-yard touchdown in the third quarter to put the North up 21-12 and back in control. Dunkleberger hit Clinton's Zach Krause for his third passing touchdown of the game to pull the South within 21-19 early in the fourth quarter, but the team's largely played at a stalemate for most of the rest of the period.

The South team took over late in the game with a final chance to put something together, and advanced deep into North territory in short order. After the drive stalled, Ponterio came on for a 40-yard field goal attempt, which he booted through with 17 seconds remaining to give the South the lead. The North's last ditch efforts came up short, giving the South team the win.

Dunkleberger finished with 155 passing yards and three touchdowns in the game, adding a team-best 51 rushing yards as well. Platteville's Donovan Blevins caught 7 passes for for 113 yards.

The North team got 93 rushing yards and a touchdown from Fox Valley Lutheran's Zayne Rodencal, while Kobe Berghammer threw for 111 yards.

For the eighth consecutive year, the South team claimed victory in the Large School All-Star Game with a 27-7 win over the North.

Stoughton's Brady Schipper was outstanding all day, scoring the first touchdown of the game on a 25-yard run less than two minutes into the first quarter.

The North would tie things up early in the second quarter when Alec Rosner of Kimberly found the end zone from ten yards out on a keeper, but it was the South that controlled things the rest of the way.

Cade Garcia of Whitefish Bay threw a pair of touchdown passes in the second quarter, one to Schipper and another to Whitefish Bay teammate Alex Anthony, to put the South up 19-7 at the break. He'd find Kenosha Bradford's Marquon Williams in the fourth quarter to provide the final score of the game.

Garcia finished with 204 yards on 9-of-14 passing with three scores, as Evansville/Albany's Zach Mielke was also very effective throwing the ball for the South, going 6-for-7 for 100 yards. Schipper led the team with 62 rushing yards, while DeForest tight end Bryce Duffy hauled in four passes for 101 yards receiving.